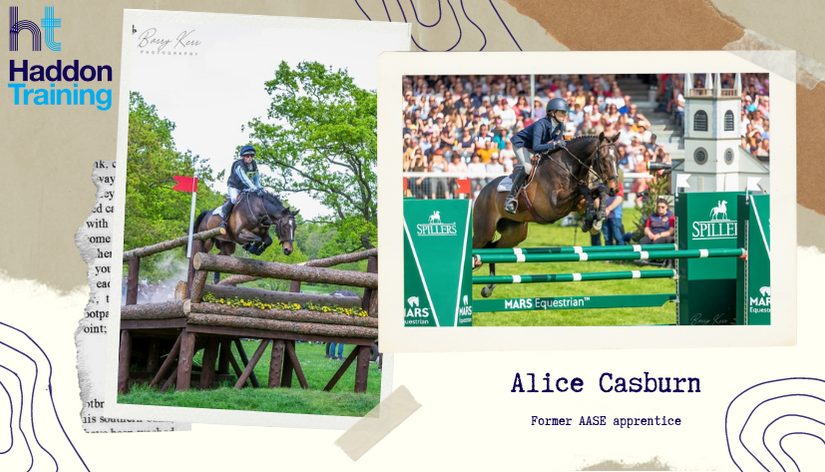 We have high hopes for former equine apprentice, Alice Casburn, who recently celebrated success at Badminton Horse Trials. It was great to catch up with Alice to discuss her advanced apprenticeship in sporting excellence (AASE) apprenticeship and her hopes for the future.

Alice says, “I currently work alongside my mum at our livery yard in Norfolk. She is an experienced trainer and has also competed at Badminton and Burghley Horse Trials. This is where I completed my level 3 Advanced Apprenticeship in Sporting Excellence apprenticeship. It’s great to have her knowledge and guidance to learn from.

The psychological element of my apprenticeship was incredibly influential. It focuses on the chimp paradox exploring what impact our own “chimps” can have on performance. I also received a great insight on other aspects such as nutrition, technical and tactical riding, as well as managing social media and communication.

I was excited to make my Badminton Horse Trial debut on my mother’s special second generation homebred gelding, Topspin.  He’s quite quirky but we have a phenomenal partnership and I think that played a huge role in what we’ve achieved together.

Our main focus was on fitness but also making sure he went feeling confident. In the run up to Badminton, we prepared by running at a number of horse trials, including Thoresby Park, where we secured a double clear and 7th in the advanced, and Burnham Market where we achieved double clear and 11th in the 4*.

In the future, I would love to be a contender for the Young Riders European Championships in July 2022 as well as gaining more experience at 5* level later on in the year.”

Alice, you’re an inspiration. We look forward to following your future success.

If you are looking to begin your equine career, contact us here.